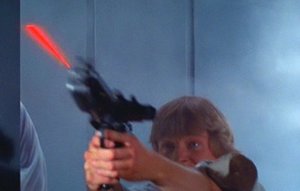 If you see it coming, it's probably not traveling at light speed.
Advertisement:

When you turn on a Laser Sight, it immediately shows up on your target. This is because it's a laser and moves at the speed of light. So wouldn't you think a laser weapon would also (effectively) immediately hit the target? Logically, yes; but this is TV, where Hollywood Science rules. Thus, energy weapons move a lot slower than the speed of light (and a lot slower than bullets in the same show) and can be dodged after they are fired. (Occasionally, it's handwaved by the dodger seeing the person aiming at them and going for the trigger, and moving in the split-second before they pull it.) Regardless of a laser's frequency and the medium it's shooting through, it will make futuristic zap noises and be visible (and glowy).

Most of the complaints about laser weapons not behaving like real lasers are because their primary function in TV are not to be realistic depictions of how real energy-based weapons would work. They are merely stand-ins for "real" guns to appease media watchdogs, to establish a show as being futuristic, or simply applying the Rule of Cool. Being able to show the audience who is firing and where is yet another plus, for which the shots can be Colour-Coded for Your Convenience. In fact, the usual "laser bolts" effect looks a lot more like machine gun fire using tracer bullets (which was even colored according to nation, as in Star Wars) and early writers' World War II experiences may have inspired the effect.

For those keeping score, the former title of this trope (Frickin' Laser Beams, which is now a redirect to Energy Weapon) comes from an otherwise unrelated line in the first Austin Powers movie ("I want sharks with frickin laser beams attached to their heads!" - and when they appear in the third movie, they are realistic lasers instead of a Ray Gun). If it's Raygun Gothic, it's probably a Death Ray. When such weapons are used excessively, see Beam Spam. And when they track their target like missiles, see Homing Lasers. Often overlaps with Hand Blast for the user's convenience. See also the Laser Blade, when your lasers are used to cut things at melee range.