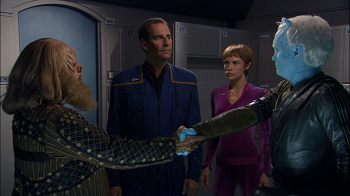 "Humans share one unique quality: They build communities. If the Narns or Centauri or any other race built a station like this, it would be used only by their own people. But everywhere humans go, they create communities out of diverse and sometimes hostile populations. It is a great gift, and a terrible responsibility-—one that cannot be abandoned."
— Delenn, Babylon 5
Advertisement:

In video or Tabletop games this may overlap with Humans Are Average - rather than getting powerful bonuses and penalty, humans are given small perks to diplomacy-related skills.

Of course Humans Are Diplomats and Humans Are Warriors, though opposite, need not exclude one another. After all Humans Are Special and "Speak softly and carry a big stick" was coined by humans.