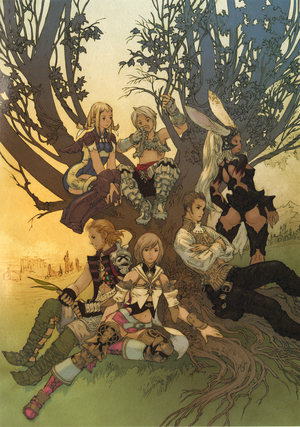 The main party, taking a brief respite from their journey.note Clockwise from top: Vaan, Fran, Balthier, Ashe, Basch, Penelo
"The reins of History back in the hands of Man."
— Dr. Cid
Advertisement:

Final Fantasy XII is the twelfth game in the butt-blisteringly popular Final Fantasy RPG series, and the first main game in the series to be set in Ivalice. It's a standalone prequel to Final Fantasy Tactics and takes place many, many years before in an Ivalice with technology and nations more grand than anything seen there.

The story begins with the defeat, and subsequent occupation, of the Kingdom of Dalmasca at the hands of the powerful Archadian Empire. Two years later, an energetic young street thief called Vaan finds himself sucked into the languishing resistance movement led by none other than Ashelia B'nargin Dalmasca, princess heir to the Dalmascan throne, thought dead. Ashe is determined to regain her kingdom and take revenge against the Archadians, and the key to this might just be the legendary nethicite once used by her ancestor to unite Ivalice under his rule.

The story is also about Basch fon Ronsenberg, a proud knight of Dalmasca thought to have betrayed his king on the eve of Dalmasca's defeat, now imprisoned in a cell far from human contact. It's about a dashing Sky Pirate called Balthier and his frosty Viera co-pilot Fran, who have their eye on the riches they can acquire while tagging along with Ashe. It's about Penelo, Vaan's childhood friend who finds herself yanked into the chain of events thanks to her relationship with Vaan. It's about Archadian nobleman Vayne Solidor and his ruthless campaign of intrigue and reformation, and about his young brother Larsa, who wishes to unravel the web of deceit his brother has woven.

Final Fantasy XII is a complicated and detailed game noticeably different in storyline from other Final Fantasy games; whilst other games tend to focus on quests to save the world by defeating a Big Bad, XII is more a story of nations and politics. Power plays are not made just with shows of force, they are made through implicit threat of force, from the rumors of commoners that echo to the higher eschelons of power, and from the weight carried by important names and ideas. It examines what true power really is, the morality of war and revenge, and the meaning of honor and patriotism. That is not to say the game is not a character piece, though — most of the major characters have their own answers to those questions that have shaped their worldviews, and those views are often challenged during the game. Grey-and-Gray Morality is in full effect with villains that demonstrate virtue and pragmatism, heroes that are flawed and misguided, and those who are caught between either and trying to decide which side they belong to.

The game is a hybrid of turn-based and action gameplay. Party members move around the field engaging enemies in real time with every action they take having a charge time, shown in place of the traditional ATB gauge in the HUD. To ease micromanagement of the party in such a system, XII utilizes a system called "Gambits" that allow players to program their party's AI in great detail, setting up specific commands to execute under specific conditions and giving them order of priority. Basic Gambits to attack enemies and heal wounded allies will get a player through normal battles fine, but bosses are more challenging and will need player input; or, if the player is very clever about setting up their Gambits, the party may be able to take care of themselves even in trying battles. The game's Limit Break system are "Quickenings", quicktime events where players must quickly shuffle commands and input the next attack to string chains of Quickenings together for higher damage and to trigger Concurrences.

A major claim to fame for Final Fantasy XII is its very deep world, arguably one of the deepest of the franchise. ​There are hundreds of hours of side content, including optional dungeons, bonus bosses, rare treasure to farm from rare enemies so you can sell it to unlock items for purchase in shops, and more. It has an encyclopedia's worth of lore on monsters, locations, local cultures and species, and their traditions and history. All of it is optional fluff however, there for players to engage in as deeply or not as they want, though doing so often provides clues on how to access the game's more obscure secrets, like bestiary entries that indirectly tell players which enemies can be farmed for specific items. The game homages other Final Fantasy games with its Espers, which are either taken directly from Tactics or are a reference to a past Final Fantasy villain, most of them sharing the same name as their inspiration and having lore that is a nudge and wink to their original appearance.

Has a direct sequel for DS, Final Fantasy XII: Revenant Wings, an unfinished Comic-Book Adaptation, and a cameo by Vaan and Penelo in Final Fantasy Tactics A2.

An HD Updated Re-release for PlayStation 4, Final Fantasy XII: The Zodiac Age, was released in July 2017 in all major regions (July 11 in Western regions, July 13 in Japan), implementing the International Zodiac Job System release and all of its changes and features, including a high-definition retexturing and orchestrated music tracks. A Steam port was released on February 2, 2018 worldwide, and Nintendo Switch and Xbox One ports were released in April 2019 (April 25 in Japan, April 30 in the West).