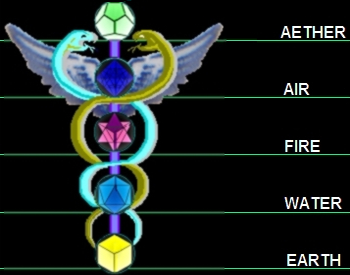 The power of the elements. The basic building blocks of the world. The foundation of magic and the supernatural. Keeping the balance of the world at equilibrium.

Balance? Yeah, balance. Each element usually governs a certain part of nature, and for the world to operate properly, the elements must be equal in power. Else, there might be a risk of a world-wide disaster.... The balance might be realized by having one element being strong to another and weak to another.

Therefore, you would expect all things associated with the elements to be balanced as well, right? The Ice Blade should be as strong as the Fire Blade, right? The spell Water3 should deal the same damage as Thunder3, right? The Lightning Elemental and Wind Elemental should be equal in power, right?

Sometimes, things associated with elements are actually not balanced in power. There might even be a case where Fire is weak to Water, but the Fire elemental is so much stronger anyway that it completely defeats the Water elemental. This is actually more like Real Life than the alternative. Splashing someone with water should be as effective as hurling fire at them? Really?note  Though of course, what the proper ordering of the elements would be is up to debate. For instance, which would be more useful to have the ability to manipulate in a fight with a person: fire, or the substance that makes up 80% of their body?

As a general rule, expect the elements of Light and Darkness to be stronger than other elements in the Elemental Rock–Paper–Scissors, but still belong in it. Related to Sorting Algorithm of Weapon Effectiveness. Compare Element No. 5 or Infinity +1 Element, which are purposely designed to be much stronger and do away with the rock-paper-scissors completely. Compare also Spell Levels, where spells within the same element/school further have different power output levels.