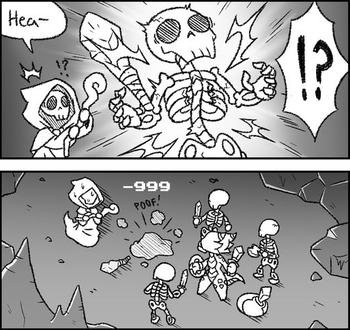 "Who'd have thought being a vampire slayer was so fuckin' easy? Stakes and garlic, waste of time, chuck some feathers from the item store at it!"
— The Spoony One, on Final Fantasy VIII's use of this trope
Advertisement:

A game mechanic where undead enemies can be quickly defeated with health items or by casting healing/revival magic. From a gameplay standpoint, this simply allows healing skills to do double duty as Turn Undead, and makes the party's dedicated healer not-so-useless when your party is asked to explore that ancient crypt at night. Logically, it's often explained or assumed that the source of healing magic (usually nature or the divine) is anathema to the undead. This particular example is one of the worst cases of Guide Dang It!, since it's unintuitive to cast a healing spell on an enemy if players are unfamiliar with this trope, and they may assume that it's simply not possible to do so for the quite logical reason that no player would want to heal their enemies in any other circumstances.

Another way to look at it is that revival magic/items bring dead things back to life, therefore using them on something that is undead causes it to become unalive... in other words, dead.

For overlooked techniques that are genuinely useless except for one very specific situation, see Not Completely Useless. Compare Sliding Scale of Undead Regeneration for ways the undead can heal without, err, re-dying? Subtrope of Holy Hand Grenade, where Holy magic is explicitly used to kill and maim enemies, living or not. Also a subtrope of Outside-the-Box Tactic, which covers any weakness an enemy might have that is not immediately apparent.