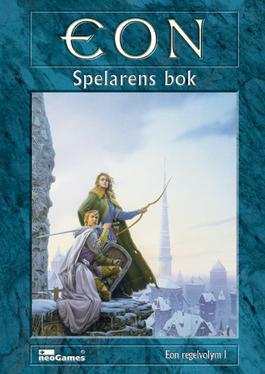 Eon is a Swedish fantasy RPG set in the world of Mundana, which is essentially a Standard Fantasy Setting, but with a surprising amount of nuances. Every race, nation, and individual described has a perfectly reasonable explanation for what they do, and no-one is ever in it For the Evulz. There is no good or evil, there are just sides. Unlike Dungeons & Dragons Eon relies heavily on world description and story hooks rather than rule expansions, and there are very little "crunch" in all but the core books. This has over the years resulted in a very detailed and complex setting that can't quite decide whether it wants to be down-to-earth or High Fantasy; in practice, it's a mix of both, somewhat like A Song of Ice and Fire. The rules are vaguely BRP-based

and very detailed and gritty with a lot of bookkeeping, and a common complaint is that combat resolution takes too much time, although later editions has made the rules much more stream-lined and introduced various options for simplifying stuff. An unusual feature is the "scientific" system for how magic works, with the rules corresponding closely to a broad range of "magic theories" in the intellectual traditions of the gaming world. The rules in particular make Eon somewhat like a hot potato on the Swedish gaming scene; it's a love-or-hate thing.