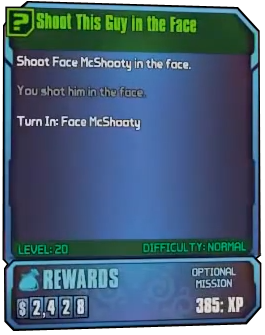 Nice job shooting his face. Enjoy your +1% completion.note But he was asking for it!... Literally.
"For a bunch of guys on a mission to save the world, you sure do love your detours."
— Gig, Soul Nomad & the World Eaters
Advertisement:

A sidequest (or optional quest, side mission, etc.) is any part of a video game that is not required to complete it. Sidequests come in a variety of forms, and completing them generally brings reward to the player such as additional equipment or abilities, areas to explore, supplemental plot related details, or fun unlockables.

Going out of your way and completing all sidequests results in 100% Completion.

Some sidequests such as the Bonus Dungeon and Bonus Boss may provide challenges more difficult than any content available through the main storyline. This allows more casual players to still complete the game and see the plot resolved, while also giving gamers seeking an additional challenge something to go after.

It is important to note that this appears in practically every game which gives the player even a slight amount of free rein, and is one of the best way for a developer to add more content and extend the length of a game. If sidequests take up the majority of the game, it may be a Wide-Open Sandbox.

by Extra Credits, the prevalence of the Big Five is often a result of the common view among game designers that the only purpose of sidequests is to justify in-story the endless combat grind gameplay.