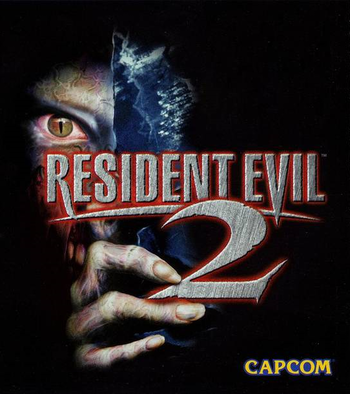 You have once again entered the world of survival horror. Good luck!
"This is just the beginning."
— Leon S. Kennedy

Resident Evil 2 is the second game in the Resident Evil franchise. It was originally released for the PlayStation in 1998. After the unexpected success of the original Resident Evil, Capcom immediately set up a team to work on a sequel and turn Resident Evil into an annual franchise. The company initially scheduled the sequel for a Spring 1997 release, but the original version of the game, dubbed Resident Evil 1.5, disappointed the developers. Rather than release a game that didn't satisfy their expectations, the team went back to the drawing board and delayed the game's release by a whole year. The gamble paid off, as Resident Evil 2 would go on to become one of the best-selling and most critically acclaimed Capcom games in history. True to its nature, Capcom re-released the game across various other platforms: The PS1, a DualShock support re-release months after the original release, the PC, the Nintendo 64, the Sega Dreamcast, and even the Nintendo GameCube.

This time around, players control two newcomers to Raccoon City: Leon S. Kennedy, a rookie R.P.D. officer late for work; and Claire Redfield, the sister of Chris Redfield (one of the survivors of the Mansion Incident) who went AWOL while investigating the Umbrella Corporation. Two months later, the T-Virus somehow leaked into Raccoon City's water supply, causing it to spread quickly and create an even bigger outbreak than the one around the Spencer Mansion. Leon and Claire arrive in town together, and while they're forced to split up by circumstance, they still cross paths now and again while shooting zombies and looking for the root of the outbreak (and a way out). But Umbrella wants to make sure no one can blow the whistle, so they send in an improved Tyrant, the featureless "Mr. X", to find the evidence first. And as if that wasn't enough, T-Virus mastermind William Birkin seems to have infected himself with a rather nasty strain of the virus...

Whereas Resident Evil segregated its branching paths, Resident Evil 2 allows the player to replay both routes from either Leon or Claire's perspective, creating a total of four possible scenarios. Under this premise, actions performed by the first character affect the environment of the second (e.g. an uncovered passage in Claire's playthrough likely won't need re-clearing in Leon's chapter). Players can unlock a miniscenario titled "The 4th Survivor" after finishing both characters' scenarios, as well as a harder version of the same called "The Tofu Survivor". Later releases of the game, excluding the Nintendo 64 version, added the "Extreme Battle" mode, a three-stage minigame.