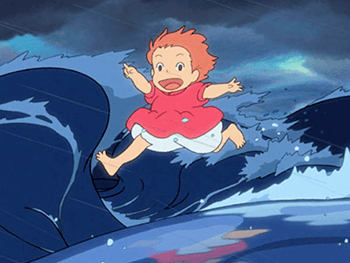 Running on pluck. Running on waves and pluck.
"Aren't you scared?"
"Oh, yeah. But while I'm mouthing off, I'm Feisty Heroine. Nothing bad happens to Feisty Heroine."
— Wisdom # 6
Advertisement:

You might be able to pile life complications onto this young woman/girl, to the point where the audience would forgive her if she just refused to go on. She might even have an episode or so where she does throw in the towel, because human beings can only take so much of what the universe is handing out for her. But the Plucky Girl always comes back. That's the bravery part.

The optimistic part is the rest of it. This character leans toward the sane version of The Pollyanna, blending the agency of the Action Girl with the sweetness and wise charm of the Spirited Young Lady, while exhibiting a strong sense of optimism and an unassailable spirit that differentiates her from the grimness of a Determinator. You can beat her, but damned if she'll let you break her.

Male versions exist, but they tend to be closer to Determinator territory instead, because men always have to be MANLY.

Not to be confused with Plucky Office Girl, though they may overlap once in a while.