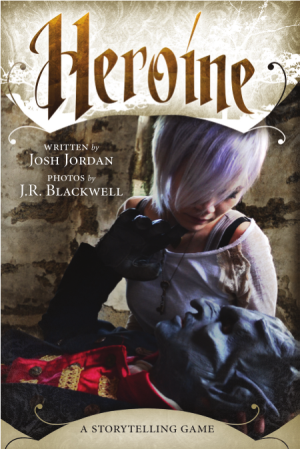 Heroine is an indie Tabletop RPG created in 2013 by Josh Jordan of Ginger Goat Games. The game is very different from your regular Dungeon Crawling and Heroic Fantasy RPGs: not only are there no combat rules, but it is instead designed to recreate Down the Rabbit Hole storybook narratives in the vein of Labyrinth, The Wonderful Wizard of Oz, Alice in Wonderland, and The Chronicles of Narnia.

At the start of the game, one of the players assumes the role of the eponymous Heroine — a Plucky Girl Trapped in Another World of fantasy and magic, — while the others play her quirky Companions. Together, they set out to find a way for her to return home and, along the way, to defeat some evil plaguing the Magical Land, which is controlled by the Narrator.