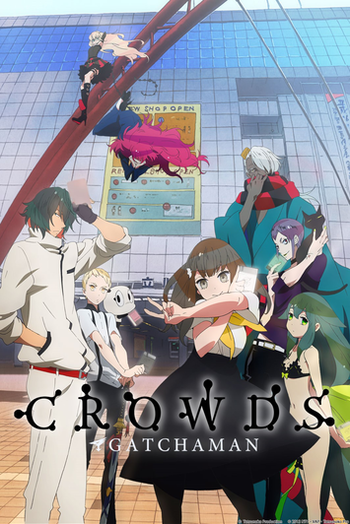 What makes a hero?
"What the world needs from now on aren't stand-alone heroes... but the entire human race turned into heroes!"
—Rui Ninomiya
Advertisement:

The year is 2015. The city of Tachikawa has become home to special fighters known as the Gatchaman Crew (G-Crew), assigned by a council to protect the Earth against criminals with their superpowers. But a mysterious entity known as the MESS proves to be an escalating threat, leaving the G-Crew to have to fight it off. A young artist named Hajime Ichinose is the latest recruit to the G-Crew, and her impulsive personality sets major changes in motion.

Gatchaman Crowds is a 12-episode Continuity Reboot of the 1970s anime Science Ninja Team Gatchaman. However, it is a radical departure from the concepts of the original, with the team receiving their powers from a source known as "NOTE" and no longer wearing suits themed after birds, with their suits instead reflecting their special abilities.

It started airing on NTV on July 12, 2013, and is directed by Kenji Nakamura (Tsuritama). It has been licensed by Sentai Filmworks, who also currently hold the license for the original Gatchaman.

The Blu-Ray release included Gatchaman Crowds: Embrace, a "director's cut" of the last episode.note While Embrace has added scenes, some scenes were also cut. Consequentially, viewing both episode 12 and Embrace is needed to get the whole story.

Check out the Characters page!