Anime / Gargantia on the Verdurous Planet 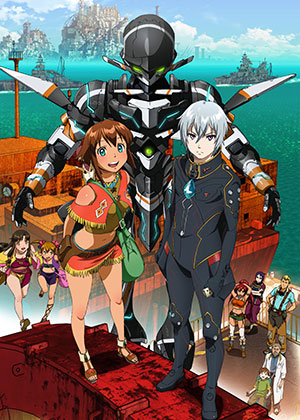 Gargantia on the Verdurous Planet (Suisei no Gargantia) is a Mecha anime produced by Production I.G and written by Gen "Urobutcher" Urobuchinote Though Urobuchi was apparently mostly involved with the script for episode 1 only., aired as part of the Spring 2013 Anime broadcasting season.

In the far future, humanity has conquered the stars under the banner of the Galactic Alliance of Humankind and its capital, a gigantic space colony called Avalon. But an obstacle has appeared in mankind's road to the future: a war with a race of Starfish Aliens known as Hideauze, which the Alliance is losing. In desperation, they send all their forces to launch a surprise attack on the alien home world, but fail and are forced to retreat. Ledo, a mecha pilot, is unable to board a retreating ship in time and attempts to traverse the wormhole leading home in his mecha, only to be warped to a random point in space-time.

Waking up from cold sleep six months later, he finds himself in a place neither he nor the computer of his mecha, Chamber, can recognize, with human residents speaking an unknown, seemingly ancient language, using inferior and completely outdated technology, and living without any signs of war. Ledo is astonished to learn that this place, which has a naturally breathable atmosphere and none of the gravitational anomalies that would be present on a space colony, is actually a planet practically unknown to the Galactic Alliance of Humankind: Earth.

Viz Media has licensed the series for the North American market.

The company plans to stream the series on its website, as well as release the series (and the OVAs exclusive to the Japanese disc release) on DVD and Blu-Ray in 2014.

Crunchyroll has also licensed this show on their site

On October 10, 2013, Production I.G announced that a sequel has been green-lit.

Unfortunately, it has become the victim of Troubled Production and was released as a pair of light novels in 2015 and 2016. The only new release has been a two-part OVA subtitled Far Beyond The Voyage set two years after the original series.

Finally, with dual partners with Bandai Entertainment and DMM, an online game was released on DMM's website as a playable Browser Game with its own story in 2014.

Compare Blue Submarine No. 6, another Ocean Punk anime set during a war against marine lifeforms.

Please move any character tropes to the Gargantia on the Verdurous Planet character page and move any episode-specific tropes to recap page.