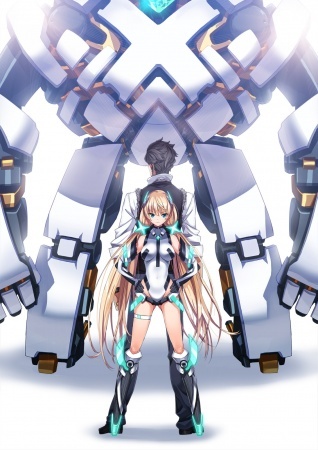 Years into the future, a global apocalyptic event known as the "Nano Hazard" scars the Earth just as humanity was ready to leave to explore the stars. Much of humanity is saved by preserving their DNA and digitizing their minds into DEVA, a space station that provides a virtual-reality paradise. Many years later, the station is hacked numerous times by someone calling himself "Frontier Setter", who promises the citizens of DEVA a better life in the "real world" out in the stars. DEVA's Central Security see Frontier Setter as a threat, enlisting one of their top agents, Angela Balzac, to investigate Earth (using a cloned body) with Earth-based operative Dingo (who has worked with Central Security on numerous occasions) to put a stop to the hacks.

What they discover, however, may shake their beliefs about what it means to be human to the core.

Expelled from Paradise (楽園追放 / Rakuen Tsuihō) is a 2014 anime feature film directed by Seiji Mizushima (of Fullmetal Alchemist and Mobile Suit Gundam 00 fame), written by Gen Urobuchi (of Puella Magi Madoka Magica, Fate/Zero and Psycho-Pass fame), and produced by Toei Animation and Graphinica. Unlike Urobuchi's other works, the movie is lighter in tone. It had a November 15, 2014 release in Japan and a December 15, 2014 release in select theaters in the US.

Expelled from Paradise provides examples of: