Manga / Engaged to the Unidentified 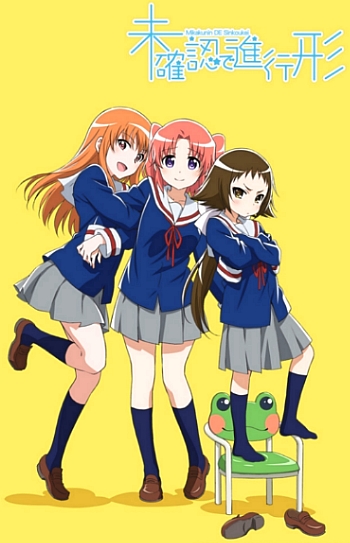 Benio, Kobeni, and Mashiro
Kobeni: "A guy (Hakuya) is going to be staying with us?!"
Akane: "There are a few circumstances..."
Kobeni: (Thinking) Oh, maybe it's for family reasons. It might be wrong to pry.
Akane: "By the way, Grandpa arranged for you to marry him."
- Chapter 1.
Advertisement:

On Kobeni Yonomori's sixteenth birthday, she gets an unexpected present: a fiancé. Her grandfather, the recently-deceased patriarch of the family, gave her hand in marriage to the tall, dark, and silent Hakuya Mitsumine, a boy her own age who hails from high up in the rural mountains. He and his sister, the pint-sized Mashiro (who claims to be a high schooler despite all evidence to the contrary) move into the Yonomori house alongside Kobeni, her working single mother Akane, and her sister Benio, who has no flaws whatsoever except for her overzealous sister complex. Kobeni isn't exactly thrilled with this new development, but her mother convinces her to try it out and decide if she wants to go through with it. As the Yonomoris and the Mitsumines begin to share a home, Kobeni dreams of a long-ago accident that left her scarred and stricken with amnesia, and she begins to suspect her connection with Hakuya runs deeper than humanly possible.

Engaged to the Unidentified (未確認で進行形 or "Mikakunin de Shinkoukei") is a manga by Cherry-Arai. It began its serialization in Ichijinsha's Manga 4-Koma Palette on April 22, 2009. It began life as a Yonkoma, but starting with volume 11 its layout evolved into an irregular wide-panel format which is frequently interspersed with traditional manga layouts.

SPOILER WARNING: The anime hinges on a Mid-Season Twist that occurs relatively early in the manga. Since this twist is the backbone of the manga's story, spoilers are unmarked. You Have Been Warned.

Engaged to the Unidentified gives examples of the following tropes: