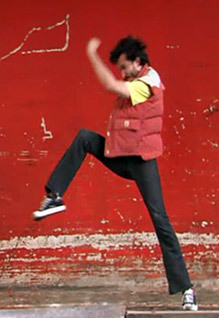 A person gets angry and then dances in order to express that anger. Rarely played seriously, as it's not generally considered a very dignified approach.

A Dance Battler takes this trope to a logical conclusion, by beating people to death while grooving. If a sizable number of a Proud Warrior Race are doing this, it is likely a War Dance they're doing to hype themselves up into battle.

Contrast with Happy Dance and Mating Dance. Compare Dance of Despair and Working Out Their Emotions.