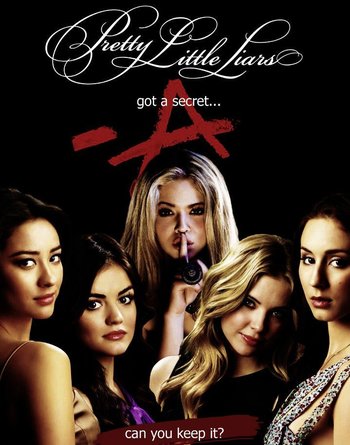 "Two can keep a secret if one of them is dead."
Advertisement:

Pretty Little Liars is a television show based on a series of young adult novels by Sara Shepard. The series follows the lives of four girls — Spencer (Troian Bellisario), Hanna (Ashley Benson), Aria (Lucy Hale), and Emily (Shay Mitchell) — whose clique falls apart after the disappearance of their leader, Alison. A year later, they begin receiving text messages from someone using the name "A" who threatens to expose their secrets — including long-hidden ones they thought only Alison knew.

The TV series premiered in the summer of 2010 on ABC Family and ended in 2017. It also had two spin-offs that were both cancelled after one season: Ravenswood in 2013, and a sequel series Pretty Little Liars: The Perfectionists in 2019. A new series, Pretty Little Liars: Original Sin, has been ordered; unlike its predecessors, it will air on HBO Max.

There's an Indonesian adaptation of the same name, which streams via Viu.

open/close all folders
A to C
D to F
G to I
Caleb: The rich girls steal, the pretty girls lie, the smart girls play dumb, and the dumb girls spend their days trying to be all of the above.
Advertisement:
J to L
M to O
P to S
T to V
W to Z
Feedback