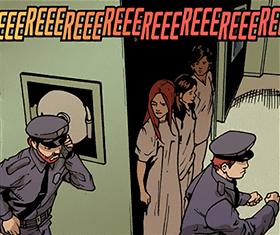 So, you're running down the street or down the hall, with the pursuer(s) hot on your heels. How to get out of this sticky situation?

Why, run into an alley or street to the side, of course!

Rest assured that your pursuer(s) will blindly dash past you - apparently, their peripheral vision is conveniently deactivated as they approach your hideout. This will happen even if they should be capable of seeing you entering the hideout.

Not to be confused with characters being pursued down an actual "blind alley", only to find themselves up against a Chain-Link Fence or other dead-end, or the short story by Isaac Asimov.