Web Animation / There she is!! 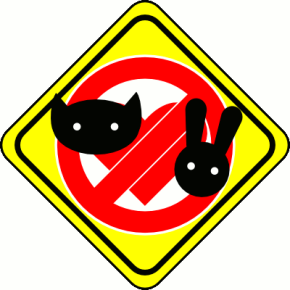 The signs that appear everywhere throughout the series, hinting that the romance in question may meet with some obstacles.
Advertisement:

, and an allegorical, Romeo and Juliet-esque story about the hatred and prejudice between the Japanese and Koreans, represented by cats and rabbits (which-is-which goes unstated), while one pair of Star-Crossed Lovers finds themselves in the middle of it.

The series is drawn in the Korean Manhwa style, done without dialogue to K-Pop music. It's about Doki, a girl rabbit who meets up with Nabi, a boy cat, and falls in love with him, much to his initial dismay.

The first episode, "There she is!!

" introduces them, and she commences to chase him all over the city with hearts trailing after her all the while. He tries simply avoiding her; then, when that doesn't work, he tries to convince her they're not suited to each other due to prevailing prejudices about Interspecies Romance. She is unconvinced. He even tries to fix her up with other rabbits, which only serves to tick her off. Finally, he gives in, then realizes he's starting to return her affections. Their relationship begins.

" has Nabi doing the nice thing and bringing Doki a birthday cake. She waits patiently for him at the party and eats the cake a relative baked her, unaware of the tribulations he's going through trying to get her cake delivered safely, including being attacked by the Jjintta Set (a gang of spiky bunnies), whose leader, Il-ho, is misinformed by member Yi-ho that Nabi is forcing himself on helpless Doki. The cartoon ends with a young bunny girl in a situation that mirrors the beginning of the episode—Nabi helps her out by carrying her to her destination on his shoulders. A Shout-Out to his earlier insistence that they're not a couple comes in the only English line in the episode.

" finally officially tells the viewer their names. Doki continues with her over the top professions of love, including a press conference to announce their first date, and Nabi gives in a little more to his feelings. But during the proper date Nabi inadvertently insults Doki with his behavior. He realizes what he's done, though, and asks her out again. She's delighted, and they plan happily for another date. But someone really doesn't like the idea of their romance...

", has Doki and Nabi officially romantically involved. But the anti-cat and bunny romance prejudice is a major obstacle, and things stop being cute and funny and quickly take a turn for the dark. They are kicked out of cafes because of their Interspecies Romance. They are accosted and attacked in the street. Doki is injured in such an attack, which Nabi takes very hard. Nabi doesn't resist the leader of the Jjintta Set when he attacks due to having spied on Doki. Nabi still ends up in jail, separated from his phone. This leads to an unfortunate misunderstanding, when Doki calls him and gets no answer, as Nabi has begun distancing himself from Doki for what he believes is her own protection.

The fifth and final episode, "Imagine

", begins with Doki leaving to go to Paradise on her own, having only texted Nabi to tell him goodbye. He tries to get her on the phone, but she already threw hers away. Thus begins his race to catch her before she walks out of his life forever.

The sheer emotional impact and cuteness of its art, plot, and message can not be adequately explained with words. Having taken five years to complete, There she is!! is still considered one of the best flash series on the internet and is a must-see.

A crowdfunding campaign was launched

in order to fund an additional 6th episode focusing on the Jjintta Set as well as a DVD compilation of all the episodes and extras with the goal being met and surpassed on February 11, 2016. On August 18, 2020, after less than half a decade in development, the bonus episode was finally released under the title Another Step. It premiered on Newgrounds for a 3 day limited run until the 21st.