Literature / The Shadow Over Innsmouth 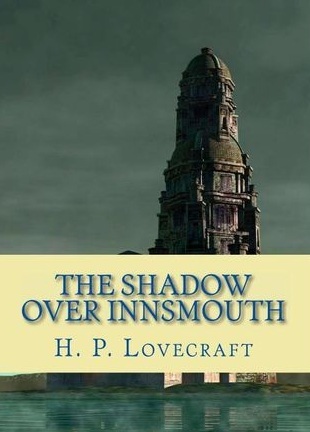 And it shall come to pass that the fishes shall stand upon it.
"The sight of such endless avenues of fishy-eyed vacancy and death, and the thought of such linked infinities of black, brooding compartments given over to cob-webs and memories and the conqueror worm, start up vestigial fears and aversions that not even the stoutest philosophy can disperse."
— This message approved by the Innsmouth Tourism Board
Advertisement:

Innsmouth is a small, run-down village on the northern coast of Massachusetts, near Ipswich, Gloucester, and Arkham. There are whispered rumors about dark dealings with the supernatural, the taint of foreign blood, and some sort of hereditary deformity. While touring New England, a young man learns of the town's sinister reputation and decides it's worth a visit. Curiouser and curiouser, he bribes the local drunk, said to be the only normal human left, with his favorite poison. The tale he tells sounds crazy, yet the narrator cannot ignore the sinister atmosphere and the evidence before his own eyes.

Written in late 1931 and published in 1936, "The Shadow Over Innsmouth" is one of H. P. Lovecraft's longest and most famous stories. Among the various beasties of the Cthulhu Mythos, the Deep Ones and their half-human spawn are among the most popular and enduring, inspiring numerous other authors (there are numerous Innsmouth short story anthologies), as well as the 2001 film Dagon, the 2007 film Cthulhu, and the video game Call of Cthulhu: Dark Corners of the Earth — especially its famous Twist Ending.

and even a silly musical synopsis

by the H.P. Lovecraft Historical Society.

The complete story can be read online here