Video Game / Call of Cthulhu: Dark Corners of the Earth 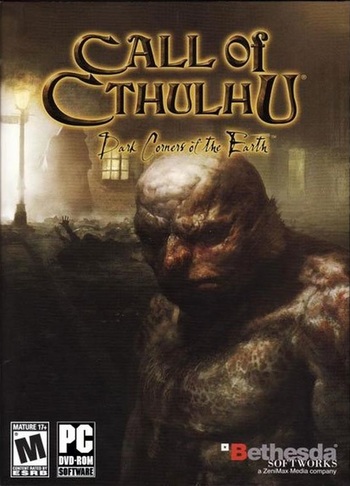 Sanity will be in short supply
Now, at my end, I can fully see. My last case opened in me a fear, a real fear. A fear of myself; of what I am, and what I've always been. All that I was is now lost. Hope? Purpose? Pleasure? All meaningless. I now walk in the shadows between worlds, and it is there that I have finally glimpsed what lives in the dark corners of the earth...
Advertisement:

Call of Cthulhu: Dark Corners of the Earth is a horror/adventure video game based on the Cthulhu Mythos, specifically The Shadow Over Innsmouth and The Shadow Out of Time. It is the last title developed by the now-defunct Headfirst Productions, and was published by Bethesda Softworks in the year 2005.

Players take on the role of Jack Walters, a police detective with a reputation for seemingly impossible insight into difficult cases, in 1920's Massachusetts. At the start of the game, the Boston Police Department has arrived at an old manor at the edge of the city to investigate alleged crimes of a resident cult called the Brotherhood of Yith. The cult is armed with rifles, and refuses to allow the police into the manor. They demand that Jack Walters be sent in to speak with them.

Walters arrives, but a shootout occurs anyway. Taking cover, Walters accidentally locks himself inside the manor. What he finds inside is quite disturbing. Skip ahead a few years, and Walters has lost his memory of what exactly happened inside, and the events afterwards. It turns out that whatever happened inside the manor gave him a Split Personality, and his new identity had taken over his body for half a decade, resulting in him getting incarcerated in an Arkham sanatorium. Though he is eventually declared sane and released, Walters is obviously no longer fit to be in the police force, and is now trying to make a living as a private investigator, actually investigating what he did himself during his period of amnesia between cases for other clients.

His latest job, after business has slumped somewhat, is to find a missing grocer in the town of Innsmouth.

It turns out that the missing person case and his amnesia are connected, and he ends up on a batshit-insane quest to both rescue the grocer from creepy cultists and discover what happened to him at the Brotherhood of Yith.

Except for a few seconds at the start of the game, the entire experience takes place in first-person, from the viewpoint of Jack Walters. There is also no HUD at all, nor are any icons or prompts overlaid onto the main window at any time. Walters's health, and mental state, can be measured by the blurriness of his vision, whether or not he is limping, the shallowness of his breathing, the blood on his eyelids, and so forth. Objects that can be interacted with (usually) glow softly.

Sadly the game's engine has not aged well. There are a lot of compatibility issues which were only compounded by the studio going bankrupt shortly after release meaning there's no official bug fix patches, though a couple of dedicated fans have tried their hands at some. Still Dark Corners of the Earth is considered by some critics to be an excellent, if not the best, Survival Horror video game at the time of release.

Not to be confused with the tabletop game Call of Cthulhu nor with its official videogame adaptation Call of Cthulhu: The Official Video Game. Now available for 9.99 USD on Steam, and 5 USD on GOGDotCom so no need to Keep Circulating the Tapes.