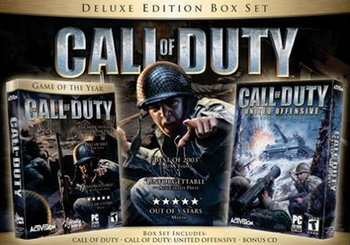 The World War II First-Person Shooter that started it all.
Alright, fellas, take five but listen up. We'll hold this place 'til reinforced, but this is just one tiny village in a war and country full of 'em, so our work has just begun. For those of you who've seen your first action - welcome to the Big Time. For those who've seen it before, trust me - you ain't seen nothin' yet.
—Captain Foley
Advertisement:

Call of Duty is the first entry in the Call of Duty series, developed by Infinity Ward and released on October 29, 2003 for Microsoft Windows.

Unlike games such as Medal of Honor, which focused exclusively on lone American soldiers Trapped Behind Enemy Lines during the War in Europe and Africa, Call of Duty focuses instead on 3 different campaigns set in different parts of Europe, with players each being accompanied by numerous AI-controlled companions. The first, the American campaign, focuses on Pvt. Martin of the 101st Airborne Division, who mis-drops into Normandy on D-Day alongside his superiors Captain Foley and Sgt. Moody, as well as 82nd Airborne Division member Pvt. Elder. Following a successful action at Brecourt Manor, Martin, Moody and Foley are then tasked with rescuing captured British officers in a daring mission behind German lines. The second, the British campaign, focuses on Sgt. Evans, a member of the 6th Airborne Division tasked with securing a vital bridge over the Caen Canal alongside his superior Captain Price. Following this successful action, Evans and Price would be reassigned to the Special Air Service, serving alongside Sgt. Waters for top-secret sabotage missions in Germany and occupied territories. And finally, the Soviet campaign focuses on Pvt. Alexei Ivanovich Voronin, a New Meat soldier trying to survive the brutal Battle of Stalingrad, who after the Germans are pushed out helps take the fight back to them, ultimately taking part in the climactic battle for Berlin.

In September 2004, an Expansion Pack, called Call of Duty: United Offensive, was released, developed by Gray Matter Interactive. This expansion added additional weapons and vehicles for all factions, new playable characters and NPCs as well as expanding the role of returning ones, and added new missions set in new locations. The multiplayer was also heavily expanded, which now featured driveable vehicles for both the Allies and Axis. The new American campaign, set exclusively during the Battle of the Bulge, focuses on Cpl. Scott Riley, who takes orders from Cpt. Foley and Sgt. Moody as they drive the Germans out of Bastogne. The new British campaign tells the story of Sgt. James Doyle, an RAF recruit who gets shot down over the Netherlands, gets rescued by SAS Major Ingram, and later joins the SAS himself as the Allies advance into Sicily. And finally, the new Soviet campaign, with Pvt. Yuri Petrenko, focuses on the Battle of Kursk and Fourth Battle of Kharkov, as the Soviets repel and later crush the last major German offensive on the Eastern Front.

Of special note is that many of Infinity Ward's members were former employees of 2015 Inc. who had previously worked on Medal of Honor: Allied Assault, while Gray Matter Interactive would later be merged with Treyarch, the other major developer of later Call of Duty titles such as Call of Duty: World at War.

Wake it and shake it, the Germans are bringing your examples!