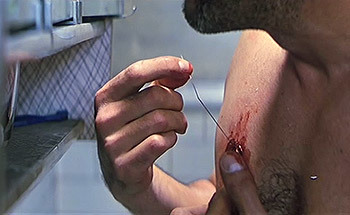 "I need a pen knife, some dental floss, a sewing needle, and a fifth of whiskey. Stat!"
— Sam Winchester, Supernatural, "Changing Channels"
Advertisement:

A character for one reason or another can't go to a hospital, or even get another character to help, so he treats his own injuries. An oft-seen version of this trope (to establish the badass credentials of a character) involves sewing the injury up, with or without the use of anesthetic. He may also Heal It with Fire.

This is often one of the most mercilessly indiscreet kinds of scenes when it comes to gore, as it almost never hesitates to show you the grueling process of the surgery in gruesome detail up close. Seeing a character have a limb blown off in a quick, sudden fashion can be startling to viewers, but the sight of a needle slowly burying itself underneath the skin is downright torturous to watch, especially if it involves the crook of one's elbow or knee being penetrated in some way. note Admit it. You probably curled up either of those body parts out of instinct reading this.

May involve We Have to Get the Bullet Out! (but Suck Out the Poison will be pretty tricky if it's anywhere above the knee/elbow) or Life-or-Limb Decision. If the character isn't medically trained, it's probably an example of Worst Aid. If he is, it's a particularly extreme example of One of Our Own. In a common variant, the character isn't alone, but is the only one with the skills and/or knowledge to perform surgery, so he is forced to instruct other characters on how to do it. Occasionally, the injured characters' companions are too squeamish to manage even this, and the character must do Self-Surgery despite their presence.

This scene is also a good chance to show that a character Feels No Pain.

Compare After-Action Patch-Up, when someone else does the first aid; and Meatgrinder Surgery, which covers the general case of treatment with limited skills and resources. See also Back-Alley Doctor for those unwilling to do this trope but still unable to go to a legitimate hospital. Contrast Afraid of Needles.

See also Pulling Himself Together, for a character who can meld body parts back together without medical intervention, and DIY Dentistry when it comes to teeth.