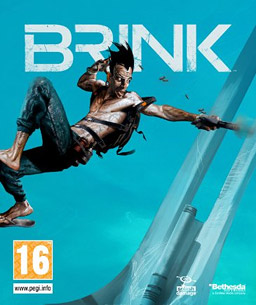 Yes, it is possible to fly like this in the game. No, you cannot shoot like that.
Advertisement:

Brink is a First-Person Shooter developed by Splash Damage, creators of the Enemy Territory series. It is published by Bethesda and was released in May of 2011.

20 Minutes into the Future, a green initiative to create a self-contained, self-sustaining city results in The Ark, a shining white utopia located somewhere out to sea to hide it from unscrupulous parties. It originally housed about 5000 civilians, workers, security forces, etc. Fast forward to 2025. The sea levels have risen, displacing millions of people all over the world. Some of these people decide to get on boats and set out in search of the Ark. Most never reach their destination, but a lucky few (about 45,000) manage to find the Ark. Our aquatic arcology is now dangerously overpopulated, cut off from the outside world and its once-sustainable resources are now quickly dwindling. Enter The Resistance, angry refugees who believe that the Founders are hoarding resources and not doing enough to improve living conditions and reestablish contact with the outside world. Enter also The Security, the Ark's police force, who have been forced to crack down in an effort to maintain order and preserve the Ark. Both sides are now on the Brink of total war.

The folks at Splash Damage promise a bold new fusion of single player, Cooperative and Competitive play, where your character will move from one to the next seamlessly. You will earn Experience Points for whatever you do no matter who you're playing with, and earn new items for Character Customization. You will also be able to move through the environment Le Parkour-style using a context-sensitive, one-touch interface that allows you to jump, vault, slide and wall run all over the place.

Poor AI, bad coding, and gameplay elements combined to kill the title on initial reviews and early after release with the end result being a critical and commercial failure that didn't last for very long as a viable multiplayer game with a competitive scene that was dead on arrival.

This game is now available for free on Steam, while the DLC still needs to be purchased.