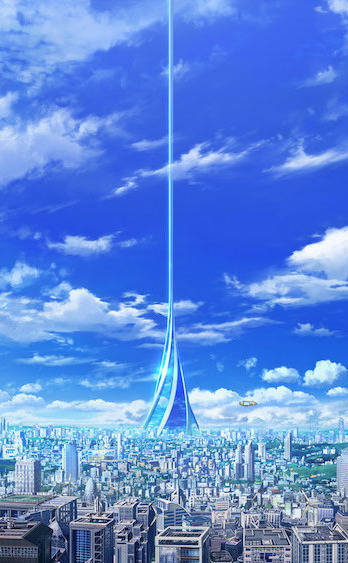 "1042nd floor, please."
"Come, let us build ourselves a city, with a tower that reaches to the heavens, so that we may make a name for ourselves."
— Genesis 11:4, The Bible (NIV)
Advertisement:

A seriously tall building. So tall, it may literally reach into outer space. So tall, it would be impossible according to real-life physics as we know them.

Common in Speculative Fiction, these buildings tower over their surroundings, or may be part of a city of similar buildings.

Indeed, it is not uncommon for them to be a single city in their own right.

To qualify as a Starscraper, a building must be clearly over 1,000 metres tall. The tallest building on Earth, the Burj Khalifa in Dubai, United Arab Emirates, is 828 metres tall. For a city entirely made of those, see Skyscraper City.

Compare Space Elevator. When the Starscraper is the home of the villain, it becomes an Evil Tower of Ominousness.