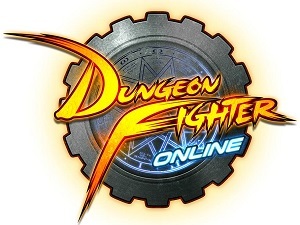 Developed by Neople and published by Nexon (by Neople globally as of April 15, 2014), Dungeon Fighter Onlinenote Known as Dungeon and Fighter in Korea is a popular Korean Massively Multiplayer Online Role-Playing Game Beat 'em Up centered around adventurers known as "Dungeon Fighters" as they travel and battle their way across the Fantasy Kitchen Sink realm of Arad. The game appears to borrow heavily from the Dungeons and Dragons series of arcade games by Capcom, as it largely focuses on Dungeon Crawling, as Dungeon Fighters encounter a myriad of wild, dangerous areas scattered across the Aradian landscape in order to grow stronger and fulfill the many, many, many requests given by NPCs that populate the world, each with their own unique tale to tell.

One of the popular aspects of the game is that skills can be activated by using button combinations, much like in a fighting game. Want to punch right through a crowd of enemies? Hold FORWARD + Z. That enemy is only vulnerable to magic damage that only your grenades can provide? FORWARD, UP + Z. Once you memorize all the unique combinations, you won't need to use as many hotkeys to activate skills, freeing up your hotkey slots for more important uses.

Players can choose to be one of ten classes:

Note the prevalent use of phrases like "most likely" or "usually" in the class descriptions. All the classes get various subclasses to choose from that can dramatically alter their gameplay, such as a Slayer that wears cloth and specializes in summoning demons or a Battle Mage that prefers to melee with spears or polearms instead of casting spells and supplements their leather armor with a powerful mana shield.

The original game was hosted by Nexon America, and while niche, it gathered a dedicated fanbase. However, in 2013, Nexon suddenly declared that the game could no longer be supported, and the game was shut down that June. In spite of this, Neople refused to let it simply die, and resurrected the game in 2014 as Dungeon Fighter Online Globalnote The "Global" meaning that it was targeted towards all regions that did not already have a version of Dungeon Fighter and regions outside America weren't IP-blocked.. After some beta testing, the game officially re-launched late 2014 with the Metastasis, a gigantic overhaul update written in as a world-rending catastrophe that caused the reset of Aradian history as we knew it. Because of the differences between the past version and current version of the game, the following tropes are divided into respective categories.

The immense popularity of the franchise has lead to a bevy of spinoff material, which includes: