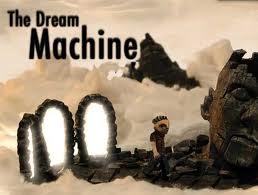 The Dream Machine is a point-and-click Adventure Game for PC by the Swedish developer Cockroach Inc. It follows the story of a young, expecting couple, Victor and Alicia Neff, shortly after their arrival in their new apartment. As they settle in, however, things soon turn very unsettling.
Advertisement:

The games themes focus on dreams, particularly Freudian and Jungian theories of dream symbols. As such, surreal elements show up early and increase as the story unfolds. Moreover, the game is made from clay and cardboard, further giving it a very unique feel.

The game is also notable for being one of the first to go for an episodic format, yet also taking its time for each episode. The first one was released in 2010, and can be played for free at the game's official website.

Chapter 1, 2 and 3 all hit Steam in 2012, while Chapters 4 and 5 followed in 2013 and 2014. The story was originally meant to end there, but the developers realized halfway through the series they needed a final, 6th chapter, which was ultimately released in 2017.

Also, has nothing to do with the Satoshi Kon & Madhouse anime currently stuck in development hell.

This episodic game provides examples of: