Men Are Strong, Women Are Pretty 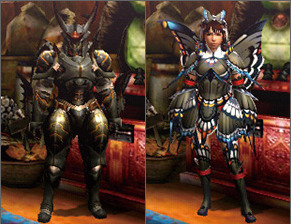 Left: The tough, manly male version of the Aelucanth Blademaster armor set.
Right: The graceful, beauty-focused female version.
When I was born, they looked at me and said, what a good boy, what a smart boy, what a strong boy.
And when you were born, they looked at you and said, what a good girl, what a smart girl, what a pretty girl.
— Barenaked Ladies, "What a Good Boy"

Some male characters who are physically attractive — particularly in a "Pretty Boy" kind of way — will be seen as weak, less than a man, or suspected of being gay. This holds doubly true if they spend time cultivating their attractiveness.

These differing standards led to the genders being held to equally damaging but different standards of attractiveness and have numerous Unfortunate Implications.

For women the implication is that your actions are irrelevant to your attractiveness to the opposite sex. As long as you're beautiful, even if you're 105 lbs of useless deadweight or a complete and utter bitch you're still desirable. And if you're not born beautiful enough, no matter what you do, Failure Is the Only Option for you.

The unfortunate implications for men are that men are shallow and only after one thing, thus they don't care if a woman is a dynamic, active character, and that women have no worth beyond their looks. Also, male characters will end up pulling more than their own weight, emotionally and physically, in works where this trope is in effect.

And, just like the beauty ideal puts incredible pressure on women to be beautiful, the strength ideal puts incredible pressure on men to judge themselves against an impossible standard of stoicism, willpower and physical strength. These pressures have not received as much press or attention on their effects on men and boys, partially due to the idea that men aren't as emotionally fragile as women, that things that affect women are worse than things that affect men. This in turn enforces another Double Standard: That women must be defended from the evil media, while men should be able to just shrug it off.

Around the start or a little before the 21st century, there has been more of a push to create dynamic female characters. Unfortunately this can mean the male characters they are paired with are seen as incompetent and emasculated. It is a hard balance to strike, and it's difficult to imagine a work in which a beautiful, virgin male character is saved from peril by a grizzled female Anti-Hero who is changed for the better by his pure heart, without the man seeming like a useless wussy-pants whose wuss-ness disqualifies him from being a man and, more importantly, from being saved. See Action Girlfriend for the few couples who approach such a dynamic, like Zoe and Wash from Firefly.

This is the supertrope for Ugly Guy, Hot Wife, Beast and Beauty, Hollywood Homely, Non-Action Guy, and Sexy Dimorphism. See also Beauty Is Never Tarnished, and the unequal application of Dirt Forcefield. Contrast Amazon Chaser for when a female character is desirable because of her strength and proactivity, Weakness Turns Her On for when a male character is desirable because of his weakness, whether it's temperament or body, and Nothing Nice About Sugar and Spice for when a female character feigns being helpless or girly to hide her violent side.