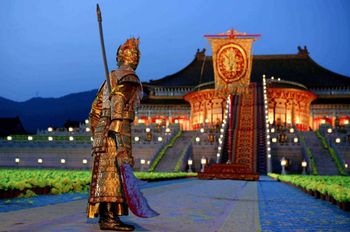 Most European audiences know this Chinese period from Asian pop culture sources such as Wuxia movies, or Japanese works such as the Dynasty Warriors series of games and the Romance of the Three Kingdoms anime, though most of these are based on much older Chinese novels, folk-stories and other source material.

Life in Imperial China, according to this view, apparently involved lots of politics and betrayal around the Emperor's solid gold palace, punctuated by battles featuring big hulky brocade-wearing brutes mowing down peasant soldiers by the thousands with their flashy musou attacks. When you met a fair maiden, either she was skilled enough with martial arts to kick your butt, or she was a supernatural creature in disguise.

See Dynasties from Shang to Qing for a history of this series of ages (it's often forgotten just how long that history is; "Imperial China" lasted for over 2,100 years,note From Qin unifying China in 221 BCE to the fall of the Qing in 1912 while the pre-Imperial era easily lasted more than a millennium), and No More Emperors for what happened when the last of the Chinese kingdoms and empires fell in February 1912.

Chinese works set in this era:

Japanese works set in this era:

Korean works set in this era:

Western Works set in this era: