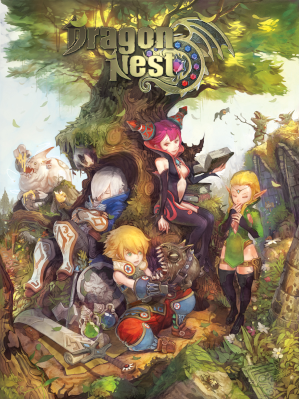 The four starting classes. From left to right: The Cleric, the Warrior, The Sorceress, and the Archer. Not shown: the other five classes. (Tinkerer, Kali, Assassin, Lencea, and Machina)
Advertisement:

is a free-to-play MMORPG developed and published by Eyedentity Games. In Dragon Nest, players pick one of nine classes (which can specialize at higher levels) and fight through hordes of standard and not-so-standard fantasy nasties in a cutesy, Super-Deformed world. The game has an Always Over the Shoulder camera (with the Gears of War angle more akin to MMO fighters like S4 League rather than the traditional position in World of Warcraft — era MMORPGs) and plays like a Third-Person Shooter with a focus on short-to-middle-range combat and melee.

The game world is highly detailed and most of the maps are large, with higher-leveled missions sporting multiple alternate paths, many levels of elevation and secret rooms packed with destructible objects. The majority of areas are instanced for each party to keep gameplay smooth on weaker machines and the only 'massive multiplayer' interaction takes place in towns where players can trade and chat (the initial release allowed players to use combat skills in towns but this feature is currently disabled, possibly for technical reasons). In these gathering places players have access to a variety of standard social networking tools like private chatrooms and party finders.

Combat is similar to the Dynasty Warriors series, where even normal attacks will (barring glitches or lag) hit everything the animation connects with, and enemy attacks can be dodged on sight. Skills can be huge, devastating, and gorgeously animated, especially for the magic-based classes. Despite all the power at the players' disposal, caution is still necessary as all enemies have at least one attack than can stagger or launch the Player Character and even Mooks have a nasty habit of cooperating to juggle or 'stun-lock' the player to death. Most bosses are usually much larger than the Player Characters, much more resistant to interruption, and have proportionally more massive attacks. They also have a horrifying tendency to show up in the same capacity as a Degraded Boss later on — only without the degradation!

The game is often compared to Vindictus, another free-to-play Action RPG published by Nexon. Check out the wiki here!

Prior to September 28, 2016, the North American version of the game was published by Nexon, before handing control over to Eyedentity.

Also has a character sheet in progress. Please move individual character tropes to it.