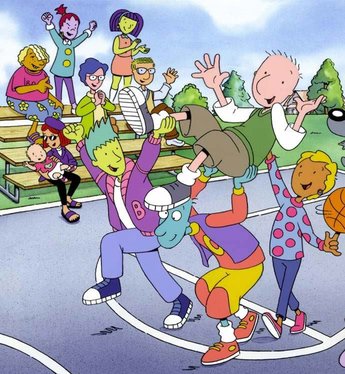 Taking the term "People of Color" to a whole new level.
Saves-a-Fox: Okay, now try a skin-colored one.
Grem: You mean a white one?
K'seliss: She means a green one.
Saves-a-Fox: I mean an orange one!
— Goblins
Advertisement:

In the real world, the color range of human skin is diverse — but not infinitely diverse. The natural color of our skin comes from the colors of protein, fat and blood: these provide only a handful of pigments in umber, amber, red and pink hues. Depending on our ethnic background, these will be layered in different proportions to color us some variation of brown.

This is not so in animation. Animators, whether they're drawing cartoon characters or building models for a video game, have the freedom to make or draw anything they want. Thus, the normal range of human skin colors needn't have any bearing on the appearance of cartoon characters. Want your characters to be blue, orange, and silver? Go right ahead! Want a dude with a purple face to live next door to a green skinned, not from space babe? The freedom's all yours, pal! If the characters are Genre Blind, their unnatural skin tones will probably go unnoticed. If not, this might be Hand Waved in different ways or lampshaded.

Giving your characters unrealistic skin tones sounds like a great way to avoid Race Tropes and Unfortunate Implications, doesn't it? Well, sometimes. Unfortunately, it doesn't always work like this. If a character is meant to be of a specific ethnicity, they will most likely have the "correct" skin tone and facial features for their ethnicity, regardless of anything else. It seems as if only "white people" (i.e., people with the European features of straight hair, round eyes, thin noses, thin lips, and so forth irrespective of actual skin color) get Amazing Technicolor Skin — everyone else is left out. Still, it's a nice thought. Isn't it?

Compare World of Technicolor Hair, which does the same thing but with hair colors.

See also Ambiguously Brown, for when the skin tones are within the realms of possibility, but not clearly "defined". Do not confuse with Amazing Technicolor Wildlife, where this trope is applied to animals. Related to Hair Color Dissonance where over time the viewer's brain might perceive the skin tone as something more realistic than it actually is. For when a specific real form of this trope (courtesy of Bizarre Human Biology) is treated as unusual by other characters and/or by the narrative itself, see Albinos Are Freaks.