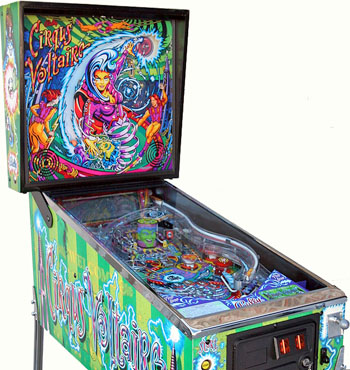 "You must challenge me!"
Announcer: "Get ready for the greatest pinball on earth!"
Advertisement:

Cirqus Voltaire is a pinball game designed by John Popadiuk and Cameron Silver, with artwork by Linda Doane. it was released by Williams Electronics (under the "Bally" label) in 1997.

As the title indicates, the game takes place in an electricity-themed avant garde circus, and the player is an aspiring performer who wishes to join this eclectic crew. To do this, he must perform nine Marvels, then prove his mastery of the show by completing the multi-stage Wizard Mode. Along the way, he will impress the Jugglers, prance with the Highwire Multiball, pop the Boom! Balloon, fire the cannon in the backbox, roll the Menagerie Ball, and challenge the four Ringmasters when they rise from the playfield. But if he perseveres and Joins The Cirqus, perhaps he will unmask Ringmaster Voltaire and be crowned as the Party Champion.

Visually, Cirqus Voltaire is notable for its brash art design, with people divided on its electrifying aesthetic, neon colors, and unapologetic flamboyant style. In terms of gameplay, Voltaire is praised for its deep but understandable ruleset, eight multiball modes, and the ability to stack multiple multiballs to quickly build up scores. If nothing else, no one remains indifferent to this game.

Production trivia: Unlike most pinball games, Cirqus Voltaire doesn't have a single design style, but was manufactured with neon tubes and Menagerie balls of various colors and patterns. It's actually considered one of the more beautifully designed tables because of it. Of these, blue and purple seem to be the most common, while yellow and red are the rarest.

A digital version of Cirqus Voltaire was formerly available for The Pinball Arcade before the license to the Bally/Williams tables expired on July 1, 2018; to mimic the multitude of colored accents mentioned above, you get a random color every time you load the game. It later reappeared in Pinball FX 3 as part of Volume 5, except players can now choose the neon and Menagerie ball color.

Ringmaster: "Do you still want to play? I think you've had enough for today."