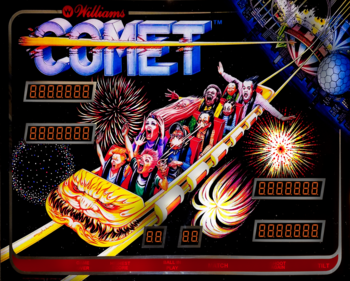 Comet is a Physical Pinball Table produced by Williams Electronics in 1986. It was designed by Barry Oursler and illustrated by Python Anghelo, and is the first title in Williams' "rollercoaster" series of pinball games.

Named for a popular coaster at Chicago's (now closed) Riverview Amusement Park, Comet takes players for a fun time at the carnival. Visit the Shooting Galleries and knock down the ducks and rabbits, drop the Dunk Tank Dummy, and visit the Funhouse. For more thrills, shoot through the Corkscrew, race up the Cycle Jump Ramp, then light up 1-9-8-6 and Ride the Comet for a screamin' good time. End the day with a fireworks show, then try to score the One Million shot before you leave.

It was the first solid-state pinball machine with a one million point shot, and its popularity prompted Williams to follow it up a few years later with Cyclone. Comet itself was featured on the pinball documentary Special When Lit, and remains a popular table for nostalgia-oriented collectors.