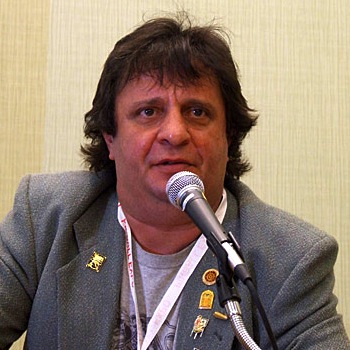 Python Vladimir Anghelo (January 1, 1954 – April 9, 2014) was an artist and game designer best known for his work on Physical Pinball Tables and Video Games. Born in Transylvania, Romania in 1954, Python showed amazing aptitude for art at a young age, and was enrolled in the Nicolae Tonitza Art School for prodigy children. After his family emigrated to the United States at the age of 17, Python worked as a Disney animator until 1979, when he joined Williams Electronics due to the potential of video gaming.

At Williams, Python worked on a variety of games, with most of his output in their pinball tables. In 1994, after the cancellation of The Pinball Circus (an experiment in creating a pinball machine in an arcade video cabinet), Python joined Capcom to work in their newfound pinball division. After developing Flipper Football, he left with the dissolution of Capcom Pinball, and would later work at Bay Tek Games.

Python described himself as "a wild and crazy guy"; his friends and colleagues describe him as a never-ending font of inspiration, full of energy and original perspectives. In 2010, Python underwent treatment for Stage 4 cancer; though he had apparently made a full recovery, it returned in 2013, requiring additional treatment. He passed away on April 9, 2014.

He was featured in a video interview with the Discovery Channel, "Python's World"; it can be seen here

Python Anghelo's body of works include:

Python Anghelo and his works demonstrate the following tropes: