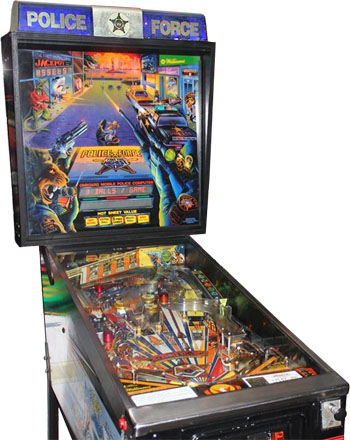 "We Enforce the Law of the Jungle!"
—Police Force motto
Advertisement:

Police Force is a 1989 arcade pinball machine from Williams Electronics. It was designed by Barry Oursler and Mark Ritchie, with art by Python Anghelo and John Youssi.

In a World of Funny Animals, a Bank Robbery is underway at the First Animal Bank, and it's up to the player to stop the wrongdoers. Hit the Drug Rat, Diamond Weasel, Machine-Gun Croc, and Loan Shark targets to put them in jail, then shoot the right ramp and bring down the Mafiosaurus Rex for the Jackpot. Spell POLICE to light the Bullseye for the Top Cop bonus, then load up the Patrol Car and roll it out to start multiball. Use your sharpshooting skills to repeatedly hit the center ramp for Unlimited Millions, or be a Cowboy Cop and Take the Highest Score from the other players.

Ambitious pinball players tend to look down at Police Force, as its modest difficulty, unbalanced scoring and "Take Highest Score" gimmick make it all but useless for competitive play. On the other hand, those same traits also endear it to more easygoing players, as its casual-friendly gameplay makes it approachable for all skill levels, and the score-stealing feature makes for rowdy multiplayer games with friends.

Word of God is that the game was originally intended to be a Batman license, with the police car as the Batmobile and the Jail as the Bat Cave. The game was rethemed when Data East got the rights instead.

A digital version of Police Force is available for the Atari Lynx as part of the Pinball Jam compilation game.