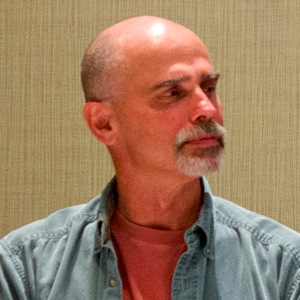 Does anyone want some yogurt?
Advertisement:

John Youssi is an illustrator and artist best known for his work in arcade pinball and video games, magazines and children's books, and yogurt. He grew up in Dover, OH, where he attended St. Joseph's Catholic school, playing on the Rambler's football team. He later attended the Chicago Academy of Fine Art, honing his skills in traditional methods of painting and drawing.

Youssi's career in arcade gaming began in 1988 when, as a freelance illustrator, he developed the cabinet and backglass artwork for Williams Electronics' Jokerz! pinball. He has been working in the arcade industry since then, illustrating numerous titles from Williams, Midway Games, and Stern Pinball, including Whirlwind, FunHouse, The Addams Family, Cruisin' USA, White Water, Johnny Mnemonic, No Good Gofers, Revenge from Mars, Sharkey's Shootout, Monopoly, the Big Buck Hunter series, and TRON: Legacy.

In non-gaming art, John Youssi has done illustrations for magazines such as Playboy, National Lampoon, and Oui, and has also illustrated several children's books for franchises such as Teletubbies, Ghosts of Fear Street and Matchbox cars. Of all of Youssi's work, however, the one that most people are probably familiar with are his food illustrations; his work has appeared on the packages of products from Naked Juice, Kool-Aid, Motts, A1 Steak Sauce, Sunkist, and "40 flavors of Yoplait Yogurt."

Today, John lives in Gilberts, IL with his wife Jenny, where he creates artwork for IGT's gambling and slot machines. In his free time, he enjoys reading American history, gardening, and long walks in the woods with his dogs.

John Youssi's work has appeared in the following games: