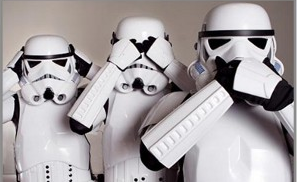 An Evil Empire? Where?
Advertisement:

The Monkey Morality Pose is a visual comedy trope frequently seen in film, television and animation.

It is based on the old idea of the Three Wise Monkeys, whose example good people should follow to live their lives: See No Evil, Hear No Evil, Speak No Evil with hands over eyes, ears, and mouth, respectively. A fourth monkey, Do No Evil, keeps his hands in his lap — but since that could be interpreted in at least one unfortunate way, it may explain why the fourth monkey is not so well known. According to the Other Wiki

, the saying dates back to Confucius. When translated to Japanese, it becomes "Mizaru, kikazaru, iwazaru" (literally, "Don't see, don't hear, don't say"). Since "-zaru" sounds like "saru" (which means "monkey") it became known as the Three Wise Monkeys.

Generally the western world has a more cynical interpretation of this trope, where it is used to convey people refusing to acknowledge things they should be acting on. It may also be used as a shorthand for people reacting to something shocking or horrifying as a type of Battle Discretion Shot, if you will.

Not to be confused with See No Evil, Hear No Evil, which is about the sound of something being withheld if we can't see it. May turn up in shows with Silly Simians.

In Rio, three of the marmosets do this, after Nigel tosses their leader, Mauro up and then catches him after he falls for a long distance.

In Rio, three of the marmosets do this, after Nigel tosses their leader, Mauro up and then catches him after he falls for a long distance.