The Television Talks Back 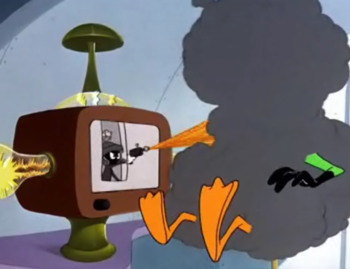 I shoot you with my Splash of Color!
"The weather man can hear them through the TV? Can the Care Bears hear everything? (leans in) Are you watching me, Care Bears?"
— Linkara, Atop the Fourth Wall, "Care Bears #13"
Advertisement:

It turns out that the people in the television can see and hear you, too, and talk back when you insult them. Usually Played for Laughs, but sometimes used for pure Paranoia Fuel.

A variant is when somebody just pretends to be this, or the television turns out to be fake and the other person is in the same room. The prerecorded form of this is The Tape Knew You Would Say That. When children's television tries to do this, it's Fake Interactivity. This trope can sometimes coincide with Kent Brockman News if it occurs during a news broadcast. There may be some overlap with The Fourth Wall Will Not Protect You and Sean Connery Is About to Shoot You.

Whilst using some exercise tapes, Brittas ends up having a conversation with then Radio Times doctor Mark Porter through the television.

Whilst using some exercise tapes, Brittas ends up having a conversation with then Radio Times doctor Mark Porter through the television.