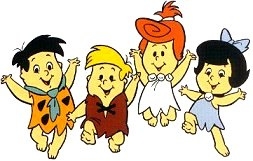 The Flintstone Kids was a Saturday Morning Cartoon on ABC that reimagined the main characters of The Flintstones—Fred, Wilma, Barney and Betty—as schoolchildren. A supporting segment, Captain Caveman and Son, was presented as a television program enjoyed by the children of Bedrock, contrary to a previous Flintstones series in which Captain Caveman interacted with the grown-up Flintstones and Rubbles.