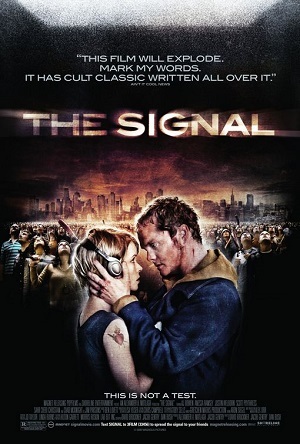 The Signal is a 2007 American horror film. It is told in three acts, each written and directed by a different individual but following the same story.

In the fictional city of Terminus, lovers Ben and Mya are awakened when a barrage of seemingly random sounds and colors begin emitting from Ben's television. The couple quickly discovers that telephones are similarly affected. Ben dismisses the disturbances and tries to persuade Mya to finally leave her husband Lewis.

After making tentative plans to leave Terminus with Ben the next day, Mya returns to her apartment building, but something is terribly wrong. Her neighbors are acting strangely and seem to be growing increasingly agitated and violent. Her husband Lewis most of all...

Not to be confused with the 2014 thriller of the same name.