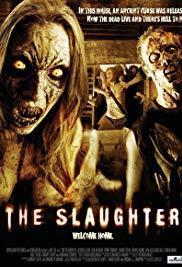 The Slaughter is a 2006 American horror film.

A group of friends own a cleaning company. They have been hired to clean an abandoned house, where they discover a book bound in human flesh. Reading the book, they discover that the house has a demon inside it, who can be awakened by a sin. Two of the cleaners end up having sex in the house, and the creature awakes to pick them off one by one.

It was distributed on DVD by Lionsgate.