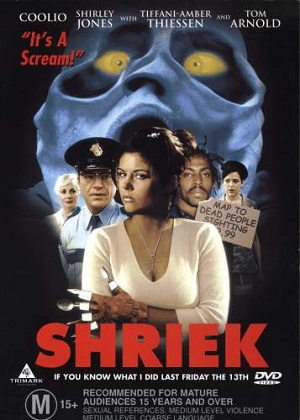 Shriek If You Know What I Did Last Friday the 13th is a 2000 comedy movie that parodies the teen slasher flicks of the 1990s, primarily Scream (1996) and I Know What You Did Last Summer.

It was made with relatively little money, but still contains quite a few recognizeable actors. It stars Tiffani Thiessen, Tom Arnold, Julie Benz, once famous rapper Coolio, Simon Rex, and a cameo by David Herman.

Released the same year as the first in the Scary Movie franchise, Shriek was sent Direct to Video to avoid lawsuits. The film was quickly overshadowed by the other parody, but gained a semi-cult following.