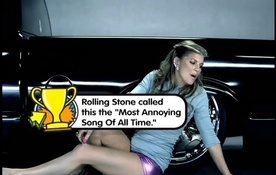 This trope also covers Pop Up YMMV.
You're watching a rerun of your favorite movie on TV.
Advertisement:

You can remember the lines to the catchy tune in the background. You know exactly when the character starts talking to his green candy apple accounting calculator. Then suddenly there is a little noise you have never heard before and a little message on screen about how this calculator doesn't actually exist and the production company had to spend big money to make a fake one.

You, my friend, have been introduced to the wonderful world of Pop Up Trivia. Wherein the little tricks that the production people put into making your show are showed off, or interesting but irrelevant but interesting pieces of information are given, such as how many calories a person would burn in 500 miles and how long it would take, but not quite as vocal as a DVD Commentary.

This trope originated with the VH1 show Pop Up Video, which aired music videos and little factoids about the video, the artist, or random related tidbits would pop up on the screen. You can tell when the use of this trope is a direct parody of the show when a popping noise is used with a cartoony icon next to the trivia fact, since that was the show's signature style. Amazon's Prime Video is currently the only streaming service to uses this in the form of a feature called "X-Ray", which is this trope applied to most media in their streaming library.