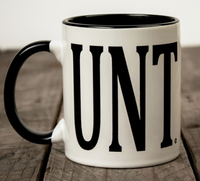 Let's not beat around the bush. This is an article about the word "cunt."

Specifically, how (at least in North America) it's the one word nobody ever uses unless they want to break someone down and in the process make themselves look like a total and complete Jerkass. Even shows comfortable with using other swear words hesitate to use it, and Internet filters sometimes block other words that happen to inadvertently contain it. It is the most offensive "generic" insult possible, rivaled only by racial and ethnic slurs (depending on who's saying them). It's virtually always used to express bitter, mocking contempt, and is more likely to be directed at women than at men; when used by a man against a woman, the argument has just gone thermonuclear. Considering that the word's literal meaning is simply "female genitalia" note In a case of Having a Gay Old Time, it comes from an Anglo-Saxon word meaning "scabbard" - cf. the German "Scheide" still retaining both meanings, the same goes for Polish "pochwa"- hell, the word "vagina" itself is simply the Latin word for "scabbard", the extremely negative connotations attached to "cunt" have Unfortunate Implications.

Note, however, that this is only true in the US and Canada. In many parts of the United Kingdom, while "cunt" is still a very vulgar insult, it is not considered anywhere near as offensive as it is across the pond — being something like a much stronger, crasser version of "arsehole" or "bawbag" — and is therefore more likely to be used in conversation (and be heard on television), and said use is remarkably more unisex in nature. Meanwhile, in Australia and New Zealand, it can practically be a term of endearment, being used as a way of referring to your mates or even strangers, as well as an insult. However, it's still not a word you should sling around if you don't have the intuition to know how you'll be interpreted; context is important. All this can naturally result in Separated by a Common Language — for instance, the Englishman who can't understand why his American friend just broke his nose; after all, he was only having a larf.

It should also be noted that it has a somewhat different application in parts of the LGBT community, where "cunty" is used as a euphemism for extreme, often stuck-up confidence and haughtiness, particularly in the ballroom scene. As an extension of that, it is also sometimes used to refer to more flamboyant and often prim and proper gay men in black and Hispanic LGBTQ circles.

A subtype of Gendered Insult. See also T-Word Euphemism and Four Is Death (it's number four on the list of Seven Dirty Words).