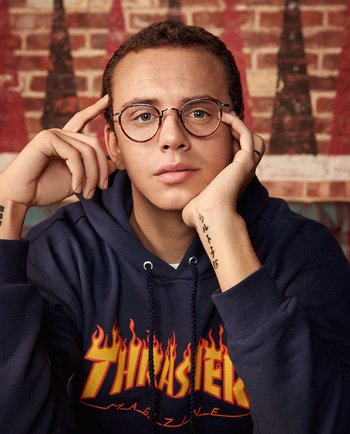 Born to an African-American father and Caucasian mother, and one of seven siblings and half-siblings, Logic's childhood was far from ideal. His father struggled heavily with cocaine, and his mother was not only addicted to alcohol but racially prejudiced despite being part of several interracial relationships. Due to inheriting most of his genes from her, he was also ostracized by his black peers for "appearing white", both of which led Logic to become conflicted about his identity.

In the midst of his environment, Logic became interested in rap at the age of 13 through the films of Quentin Tarantino (as RZA produced the soundtrack to Kill Bill), and first gained recognition with the promo mixtape Psychological: Logic - The Mixtape in 2009, which allowed him to be the opener at Maryland shows for rappers including Pitbull, Ludacris, Method Man and Redman.

His first official release was the mixtape Young, Broke, & Infamous in 2010, which got him signed to the Visionary Music Group label and saw the birth of his musical alter ego Young Sinatra, inspired by Mac Miller and named after Frank Sinatra, his favorite singer. The subsequent trilogy of mixtapes named after this alter ego (Young Sinatra, Undeniable, Welcome to Forever) not only raised his stature in the rap scene, growing a passionate fanbase dubbed the "RattPack" (both an homage to Sinatra's Rat Pack and its slight modification an acronym for "Real All the Time"), but the response to Welcome to Forever in particular helped get him signed to Def Jam, where his career continued.

Logic is well-known for his array of styles, working in different variants of hip-hop from boom bap to trap alongside R&B and indie music, and his distinctly strong work ethic. Since his first mixtape in 2010, he released at least one new project every single year up until 2020. To date, he has released eight mixtapes, six studio albums, and an album that functions as a soundtrack to his first novel Supermarket (also the album's namesake).

He announced the launch of his own record label in summer 2017, made to host a number of artists that he has close affiliations with. While the label was initially named Elysium Records, it was relaunched as BobbyBoy Records in partnership with Def Jam around two years later.

In July 2020, Logic announced his sixth album, No Pressure, alongside the news that he would be retiring from his professional career to focus on his family and on an exclusive streaming deal with Twitch (his account can be found here

), where his streams also showed his music output to be continuing in a more informal sense through fan-oriented projects.

As many suspected, Logic couldn't stay away from hip-hop for long, and he began putting out music again in 2021. At the start of the year, he released his seventh mixtape Planetary Destruction, made under the alias Doctor Destruction (an homage to MF DOOM), and followed up by posting a number of beats and singles to his personal YouTube channel, including several songs attributed to MadGicnote pronounced "magic", a collaborative project between him and producer Madlib. He officially returned with a single simply titled "Intro" on June 18, 2021, and issued an additional handful of singles before announcing his first project back: Bobby Tarantino III, released on July 30. He has since announced two more albums: College Park and Vinyl Days, the latter being released in June 2022.

His second book, an autobiography titled This Bright Future, was released on September 7, 2021.