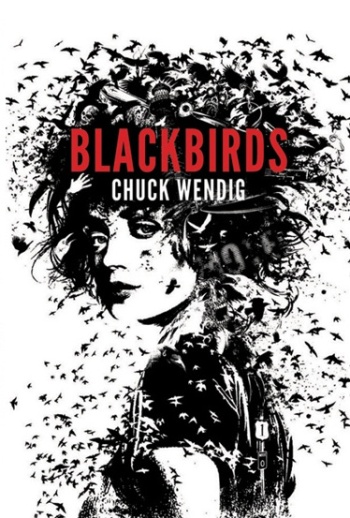 Miriam Black knows how you're going to die.
"I'm young but I'm tired. I close my eyes at night, and it's like — my dreams are like a boat anchor, man. The things I see. It's like, it's not just the traumatic deaths — the car crashes and fires and stabbings. It's the slow deaths. AIDS and diabetes and kidney failure and liver failure and kid's cancer and rectal cancer and breast cancer and cancer cancer cancer. And did I mention cancer? People just lie there. Disease leaching everything out of them the way I'm sucking on this cigarette. Whittling them down. A stick into splinters. And I can't stop it. I can't stop any of it. I have no idea how to change it for people."
—Miriam Black, from The Cormorant
Advertisement:

Miriam is no stranger to death. Possessing a unique ability to foresee a person's death just by touching them once, she's borne witness to more than her fair share of hospitals, car accidents, and other more horrific ways to die. But even for her, murder is a rarity. And when she witnesses that of truck driver Louis Darling, she is stunned to find out not only that he will die very gruesomely, but he will call out her name right before he is killed.

Over the years, Miriam has learned the hard way that what fate wants, fate gets. No matter how hard she tries, she just can't do anything to stop people from dying. But events conspire against her to make sure that if she wants to go on living, she just might have to try one more time and attempt to save Louis from his horrifying fate.

The series is comprised of the following novels:

A live-action adaptation of Blackbirds was considered by Starz, but eventually dropped.