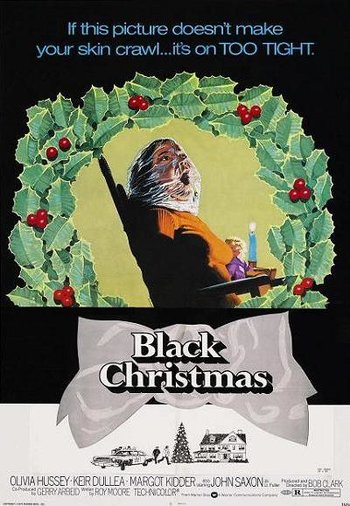 A 1974 horror film, and one of the Trope Makers for the Slasher Movie genre. It is loosely based on a series of real-life killings, and also borrows elements from the urban legend "the babysitter and the man upstairs".

The story involves a group of sorority girls who are staying over for Christmas break. Each is dealing with her own problems, and things are about to get much worse, as unbeknownst to any of them a psychotic killer moves into their sorority house attic and soon begins taunting the girls with terrifying phone calls before bumping them off one by one...

Remade twice, in 2006 and 2019. Not to be confused with Silent Night, Deadly Night; another Christmas-themed slasher flick. (The fact that Warner Bros. released this one under the title Silent Night, Evil Night in some markets doesn't help.)

"If these tropes don't make your skin crawl, it's on TOO TIGHT."