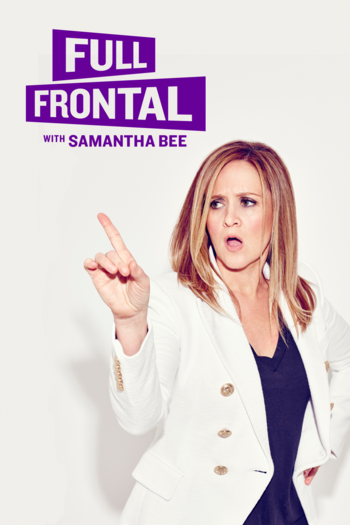 Full Frontal with Samantha Bee is an American late-night Talk Show and news satire program that airs on TBS, hosted by comedian Samantha Bee, a former correspondent on The Daily Show with Jon Stewart.

Bee served as a correspondent on The Daily Show for 12 years, becoming its longest tenured correspondent, before leaving in 2015, shortly before Jon Stewart's own departure. Bee and her husband, fellow Daily Show correspondent Jason Jones, pitched television shows to networks, and their scripted series, called The Detour, was picked up by TBS in February 2015. TBS then decided to extend their relationship with Bee to develop a late-night talk show to pair with Conan.

The show has segments that focus on news headlines, field pieces, and "grab bag" segments. Also, a number of guest actors have appeared in various segments.

Most of the episodes have been made available on the show's YouTube channel.

Tropes associated with Full Frontal with Samantha Bee include: