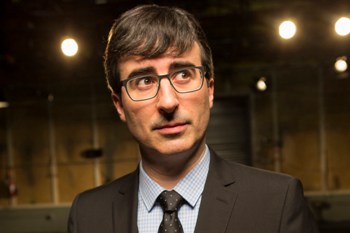 "I've made so many people angry that they kind of blur into one unpleasant memory of people staring at you with somewhere between passive aggression and active aggression."
Advertisement:

His early career followed the well-worn trail of Oxbridge Footlights, where his contemporaries included David Mitchell and Richard Ayoade. Appearances on BBC radio comedy followed, as well as an evolving stand-up act that led him to TV appearances on shows like Mock the Week.

After relocating to the USA, he was a correspondent on The Daily Show with Jon Stewart from 2006 to 2013. During the summer of 2013, as Jon Stewart was directing the film Rosewater, Oliver was selected to be the Guest Host in his absence. Receiving great acclaim as a host, he was soon offered his own show on HBO, Last Week Tonight with John Oliver, a late-night political talk show similar to The Daily Show, which premiered in April 2014.

He also had a recurring role as Dr. Ian Duncan on Community.

In his native UK, he is known for his appearances on the panel of Mock the Week. He and Andy Zaltzman also hosted monthly (formerly weekly) podcast The Bugle (he moved on in 2016, now it's Zaltzman and a rotating guest host).

He also played The Princess' father in a two-parter episode of the 2014 Danger Mouse reboot, and Zazu in the 2019 re-imagining of The Lion King (1994).