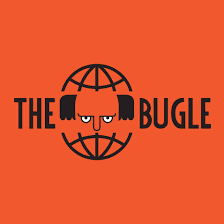 The Bugle is a weekly (formerly on hiatus, formerly monthly, formerly weekly) satirical news podcast, hosted by John Oliver (until 2016, now with rotating guest hosts) and Andy Zaltzman, and distributed by Times Online until January 2012; it continues as an independent podcast on iTunes and Soundcloud. New episodes of The Bugle are released on Fridays, related material continues to appear. It first appeared in October 2007.
Advertisement:

The Bugle has featured the following, in no particular order:

The Bugle provides examples of: