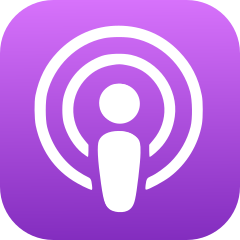 The symbol Apple uses to represent podcasts
A "podcast" (or, less commonly, "netcast") is this: a posting of files, usually audio or video, set up so that it can be subscribed to through a Web feed (RSS) by an aggregator program. That's it. That's all it is. It can be a radio show, or an audio/video blog or pretty much anything. Basically, a Radio show on the Internet.
Advertisement:

It's a very basic tool given a fashionable, swanky, yet nearly nonsensical name (which comes from playing them on iPods) to make it seem special and magical. Like pretty much everything else on the internet. On the other hand, it's a simple, catchy name for a common phenomenon, much like 'television' and 'radio', both of which earned howls and jeers when they were new (the names and the phenomena).

Notable is that the art of podcasting was arguably started by and inalienably connected to a man named David H. Lawrence XVII, as a newsletter for a radio company that attached RealAudio files to the emails that they sent out. He also went into acting a little later in life, and became best known as The Puppetmaster, Eric Doyle. No seriously, same guy.

There is a term for a book done as a podcast: Podiobooks. When a Fan Fic is given this treatment, it's known as a Podfic. For a list of audio drama podcasts in the Science Fiction genre, see Science Fiction Podcasts.